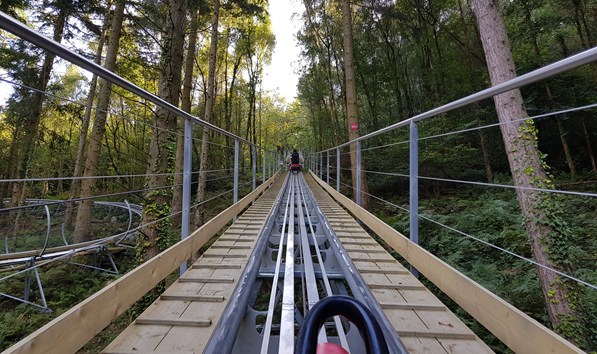 I do love a good pun. D.I.D, as I have mentioned before, stands for Dissociative Identity Disorder. It’s been a bit of a feature for me over the last couple of weeks. Upon contemplation, I have decided that it sucks. However (always looking for the positives), it is about a billionty times better than clinical depression. This blog was going to be a witty homage to The Secret Diary of Adrian Mole (aged 13 and ¾). There’s a chapter when he gives a minute-by-minute account of a school trip and I was going to do the same with my weekend away in Wales. Unfortunately, due to having D.I.D I have forgotten half of what happened, and due to be bloody disorganised, I have lost the notes that I wrote at the time, so that idea’s shot. Probably for the best. Incidentally, you know how scientists get to name laws after themselves? (think Hooke and Newton) – well here is Foster’s First Law: You will only be able find the thing you have spent hours looking for (ie the notes I wrote in Wales) once it is no longer of any use. Anyway, I decided instead to distil down my experience of travelling to Wales whilst dissociating wildly into a few key points, just in case anyone should try a similar venture:
1. If you have no memory of arriving somewhere (say, for example, Glossop….) and therefore no idea where you parked your car, Google maps has a superb timeline facility, which is a far more efficient solution than walking in ever increasing circles from the point where you find yourself having a coffee.
2. The speedometer is almost always to be found in the centre of the dashboard.
3. If you set off on your own, then it is highly likely that you are still on your own and no one is sitting in the car next to you. Unless, of course, you have picked up a hitchhiker, and let’s face it, who’s done that since they saw Rutger Hauer in The Hitcher?
4. You aren’t going to randomly go blind for no reason.
5. Your friends won’t mind if you phone them up to tell them that you think you might go randomly blind for no reason. Although they may laugh at you later.
6. Allow plenty of time for your journey, you’re going to be taking a lot of coffee breaks (because, obviously, caffeine is totally going to calm you down…)
7. It will all be worth it once you are laid under a tree in a field near Llanberis.
In spite of the, ahem, ‘challenges’, of getting my ass down to Wales, I would like to report that it was a most excellent weekend and sending love and thanks to everyone who was there. It allowed me to tick another item off the bucket list too #21 Ride a roller coaster. Am I allowed to count this one? It is the UKs first Alpine Roller Coaster – if you want to have a look, the Indepdent ran an article on it:
https://www.independent.co.uk/travel/news-and-advice/alpine-coaster-fforest-rollercoaster-north-wales-betws-y-coed-a7750696.html
It was really good fun, possibly even fun enough that I’ll try a proper roller coaster in the future….. I was going to post a photograph of me enjoying the experience, but it turns out that my facial expression whilst ‘having fun on a roller coaster’ is exactly the same as most people’s facial expression whilst ‘watching paint dry’. It’s a sort of interesting mixture between apathy and psychopathy, so I thought I’d spare you that one.
In other bucket-list related news, I have also ticked off #47 Go part-time at work. I have received my proper, official, no-they-can’t-take-it-back letter that says I only have to work 4 days a week next year (academic year – I’m a teacher). One whole, glorious day to myself. I am ridiculously excited by this prospect! The third and final item I’ve crossed off this time is #36 Eat something I’ve never eaten before. To be honest, when the waitress asked if she could give me any advice, I’m guessing she wasn’t expecting me to say ‘Yes, actually, I’m having a moral crisis, and probably need a guru, but if you’re willing to have a go…..’ The moral crisis was – do I tick off item 36 and have a goat curry (never eaten a goat), but in the process ruin my newly-found vegetarian credentials? As it turns out, the waitress must have done a bit of guru-ing on the side, because she found me a vegetarian dish containing Palm Hearts (Google them). So, one very nice South American dish later and I’ve ticked off #36 without harming any goats. Thanks, K~, by the way, for a lovely evening out and not even batting an eyelid when I dragged the poor waitress into a fairly bizarre and long-winded debate about my dinner!
So, that’s it for now…….I’m off to continue my one-woman mission to rid the world of ice-cream (is it me, or is it a bit warm at the moment?). Speak soon.